Quick definition: ICCID stands for Integrated Circuit Card Identification Number. It’s a unique 18-22 digit code that includes a SIM card’s country, home network, and identification number. You’ll usually find an ICCID printed on the back of a SIM card, but sometimes it’s included in the packaging materials instead.

Your SIM card’s ICCID determines what cellular networks your device can access and what level of access it has—so if you’re manufacturing cellular IoT (Internet of Things) devices, it’s important to understand what an ICCID is and how it works.

In this article, we’ll look at:

First, here’s what each set of numbers means.

What do the numbers within the ICCID mean?

In every ICCID number, the first two digits are always 89. This is an industry code that indicates this is a product for telecommunications networks. 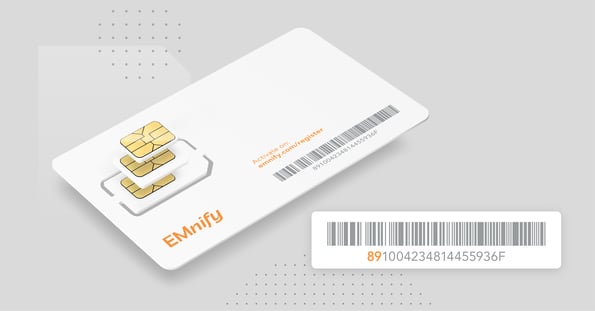 The next one to six digits usually represent the country code, which is established by the International Telecommunications Union. In this example, the country code is 1—which indicates the United States or Canada. 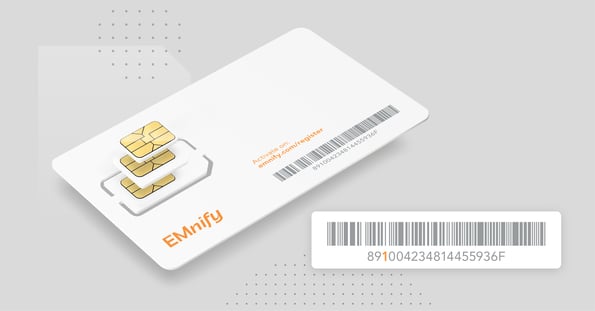 After the country code is the mobile network code (MNC), a string of one to four digits associated with the mobile network operator (MNO) that issued the SIM card. This code essentially represents your SIM card’s home network. In our example, the MNC is 004, a code associate with Verizon Wireless. 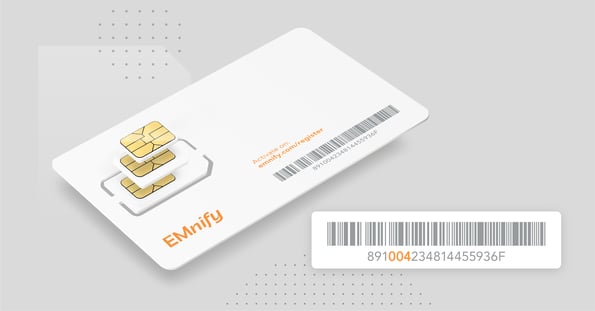 The final set of digits is completely unique to each SIM. No other SIM in the world will share this exact combination. This is what allows you to view a specific SIM in a SIM manager, activate or cancel a service, or interact with your connectivity provider’s customer service. In our example, this set of digits is 234814455936F.

How do you find the ICCID number?

Since you need the ICCID number to manage a specific SIM card, it’s important to know how to find it. (Especially if you use multiple prepaid SIM cards for the same device.) As mentioned earlier, you can usually find the code on the card itself, or on the packaging.

But that’s not always convenient. Thankfully, there’s another way to find it. You can insert the SIM card into a device, and then use the device to query the ICCID number. In a cell phone, you can find the ICCID in your settings menu.

With an IoT device, you need to issue an AT command. The exact command depends on your device’s module, but it will look something like this:

How MNOs use ICCID numbers

After you insert a SIM card into a device that uses cellular connectivity, it searches for any available cellular networks, then uses the ICCID number and IMSI to determine if the device has rights to access the network.

Here’s how it works.

When a device attaches to a “visiting” network (meaning not its home network), that network sends an authentication request to the device’s home network. The home network sends what basically amounts to a riddle that only the device can solve. The network generates a random number and shares it with the device, then uses an algorithm and a shared secret key to produce a new number based on the random one. If the device produces the same number, it proves it has the same secret key and with that it’s authorized to use the network.

If the SIM card doesn’t have the correct key to access the network, the device can only use the network to call emergency services. (Devices can even use this service without a SIM.)

ICCID vs. IMSI vs. IMEI

IMSI stands for "International Mobile Subscriber Identity." It’s a mobile subscriber’s unique identification number. Like an ICCID, an IMSI is saved on the SIM card. Most SIM cards only store a single IMSI, which is associated with a list of networks the subscriber is authorized to access. EMnify’s SIMs, however, are Multi-IMSI, meaning they store multiple subscriber identities. This allows the SIM to change identities to access more networks and select the one with the best coverage.

An IMSI is not the same as a telephone number. The IMSI number has up to 15 digits and consists of three parts:

The International Mobile Station Equipment Identity, or IMEI for short, is one unique 15-digit serial number that can be used to uniquely identify each mobile radio terminal (your device). It includes four parts:

There are also “software versions” of IMEIs, referred to as IMEISVs. In an IMEISV, there is no check digit, and the last two digits represent the Software Version Number (SVN).

There are many identifiers for cellular technology. While they all impact connectivity, they don’t necessarily impact the end user. If you want to learn more about how cellular connectivity works with the Internet of Things, check out our guide to cellular IoT, or explore how a cloud native approach to development and connectivity could benefit your business.