Five Smart Ways to Use Cellular IoT in Logistics

There are numerous smart ways to use cellular IoT in all sectors. Logistics and fleet management is a particularly exciting field when it comes to unlocking the potential of IoT connectivity, which is why there are already countless success stories in this industry. See below just five of the many intelligent ways this technology is being brought to life in logistics.

1 – IoT in logistics as real-time tracking

One smart way of using cellular IoT in logistics is cross-location tracking. This has recently been implemented at the German university RWTH Aachen, where the showcase scenario is the well-known company, GOKart, a small electric vehicle produced in a demonstration factory. RTLS (real-time locating systems) sensors are used under the roof of the factory. When picking the parts to be assembled, an RTLS tag is attached to the assembly trolley in the supply area of the warehouse and linked to the production order.

With the help of the sensors, the transponders (i.e. the RTLS tags) can be continuously located and the position calculated in real time, with a location accuracy of a remarkable 30 centimeters. As the car goes through assembly, the process progresses. Due to the spatial “moving” of the assembly cart and the constant position calculation, position-dependent actions and bookings can be triggered via the SAP system. Here, there is full integration into SAP ERP at all times. This makes it possible to change from one assembly area to the next and to automatically record bookings (i.e. feedback, goods movements etc.) in the system and to trigger actions (i.e. emails).

The worker does not have to make any manual entries at a terminal but can instead continue to assemble as usual. The connectivity required to enable this can be provided entirely via a cellular network meaning production sites are not limited to areas with public internet.

2 – Cellular IoT in Logistics: Warehouse operations with the help of augmented reality

The special feature of this application scenario is the use of augmented reality glasses (e.g. Google Glass or Microsoft HoloLens). Augmented reality is when virtual objects can be represented in a real space. You can work interactively with these objects via the glasses.

This technology offers users new and intuitive options for their daily work. In practice, these data glasses can be used to virtually display the optimal route description. In addition, the field of vision is enriched with much more information. This can be images for identification support but also general information such as quantity, size or the next loading point. The higher-level system (WMS / ERP), for example, confirms the removal of the goods by voice input or smartphone / MDE / handheld. The actual scan of the goods or the compartment is carried out either via the scanner embedded in the data glasses or via an external scanner (ring scanner, scanner in the smart device).

Overall, augmented reality helps to make routine tasks much easier and more transparent. Manual efforts are replaced by voice commands and errors and ambiguities are reduced thanks to the enriched additional information.

Driverless transport systems are used today to make the goods journey more flexible and to bridge longer distances. These systems reduce transport damage and save personnel costs. The continuous exchange of data and route-optimized control using transport control systems reduce driving and waiting times thus ensuring smooth production via a fast and constant flow of goods. Such transport robots are now available for every intralogistics task, from moving small boxes and containers to transporting pallets and goods weighing tons.

Since transport systems cross their route with other means of transport in production, a traffic light system that communicates with the driverless vehicles using optical data transmitter is often installed in practice to control traffic. In addition, the stops at which the transport vehicles stand still for some time are equipped with an automatic battery charging system. It is not uncommon for such mobile technology to use SIM cards for permanent connectivity. A prime example of cellular IoT!

The quality of a manufactured product can only be as good as the quality of its parts. Accordingly, companies not only have to ensure that their own production runs smoothly but also must be proactive in preventing defective parts. However, some sensitive materials can suffer considerable damage when they are transported to the production site, which is sometimes not recognized until it is too late.

As a result, many companies opt to use predictive transport damage management in order to monitor the transport of parts that are sensitive to fluctuations in temperature, humidity, or shocks. For this purpose, companies can link customer-related data on a corresponding platform, for example on delivery schedules and transport orders. With cellular IoT sensors, the data is transmitted to the platform in real time during transport. On clear dashboards, the company can now recognize possible transport damage during delivery. By combining new and historical data from past deliveries, risk forecasts can now be made. For example, what damage can be expected if suppliers transport goods on certain routes? In the next step, the planning can be optimized to avoid this transport damage in the future.

With such a solution, companies can predict delivery problems, take targeted preventive measures, ensure the quality of components and thus improve their production and customer satisfaction. Using cellular IoT connectivity would also eliminate limitations based on location.

5 – IoT in Logistics as a predictive supply to bottleneck management

It often happens that there are a number of blind spots on logistics routes where it is unclear where the goods are. The situation is particularly difficult to assess on the water: storms can lead the ship off course. Unloading at the port may be delayed due to unexpected capacity problems.

However, it can quickly take days or weeks for the company to become aware of this. In order to maintain production, the material planners have to rush to check whether there are still material stocks in a warehouse that can temporarily close the gap. Such situations can be mitigated by predictive supply bottleneck management. Data such as demand information and consolidation data are fed into a data store. There they are enriched with other data, such as satellite data, which can be used to determine the ship's location almost in real time.

Based on this location data and other information, it is then determined whether the original arrival time can still be observed or whether the delivery is delayed by days, if not weeks. The company thus receives proactive alerts and can reschedule accordingly - sometimes even weeks in advance, while the materials are still at sea.

Smart processes are necessary in the age of cellular IoT. If you want to digitize your company, you have to rely on new technologies and processes. These examples only explore a fraction of the possibilities that actually exist. If you are inspired by the above five smart ways, and interested in learning more about what cellular IoT connectivity could bring to your business, then chat to one of our experts via the chat box in the bottom right corner of this page.

Are you developing an IoT solution?

Join our upcoming webinar and learn about factors to consider when choosing batteries for your IoT devices! 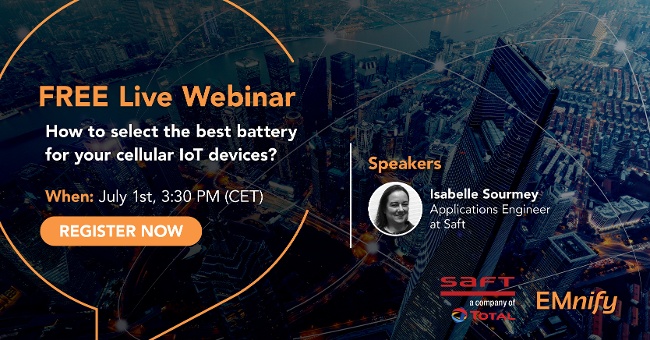