Blockchain is a relatively young technology that distributes data across multiple sources and provides a verifiable record of interactions with or changes to that data. For the last several years, the tech world has been exploring how this concept can improve the Internet of Things (IoT), bringing decentralization and better visibility to connected devices.

For IoT businesses, it’s extremely important to have layers of protection for both individual devices and the data they store and connect to. It’s also vital that these businesses can follow digital records to demonstrate their data’s reliability and identify if and when data was changed or accessed and by whom. By implementing distributed ledger technology (DLT), blockchain lends credibility to businesses and helps tighten IoT security.

In this article, we’ll examine some of the main ways IoT and blockchain can work together, as well as the key challenges to implementing blockchain in this space.

1) How blockchain and IoT work together

There are a wide variety of ways blockchain can improve IoT applications. In some ways, it’s sort of like a more sophisticated Wayback Machine for your data and devices. It lets you see any changes that have taken place and examine when they were made, but it also shows you who accessed the data or device last, how reliable the device has been historically, and in some cases, what triggered the change. This string of distributed information can also automatically trigger processes based on preconfigured conditions. If [condition] is met, then [action] occurs.

As IoT sensors and devices continue to play an integral role in important decisions and processes, it will be increasingly vital that businesses, government entities, and individuals can verify the origins of data—especially if it comes from a third party that may be motivated to alter it in some way. A business might alter data to hide fraud, or a nation could conceivably manipulate data to influence actions or distort public perception.

In some industries, blockchain can help provide quality assurance, enable organizations to detect tampering with data or goods, and facilitate audits of logistics data.

Suppose, for example, that a shipment of frozen meat exceeded its upper temperature limit in transit and spoiled on the shelf, wasting thousands of dollars in product. If the cold chain monitoring system used blockchain to record, monitor, and distribute IoT data, both parties could verify which sensor the data came from, indicating where the fault occurred and which party was responsible. In fact, blockchain technology could even trigger alerts to notify both parties when a shipment’s temperature exceeded a specified threshold.

For controlled substances, blockchain IoT could produce a distributed ledger that would highlight any suspicious changes in condition, such as unscheduled stops, container movement, or weight differences.

If someone attempts to dispute the credibility of data collected by an IoT device, blockchain technology could theoretically enable all parties to legally verify claims and confirm whether the data had been altered in any way. The challenge, however, is to prove whether the individual sensor had an issue or reported data incorrectly.

When you have thousands—or hundreds of thousands—of IoT devices, it’s easy for errors and inconsistencies to be treated as isolated instances. But if a single device repeatedly runs into problems, that’s something IoT businesses and their customers should be able to track and make note of.

Blockchain technology can give each IoT device a unique key and enable it to send encrypted challenge and response messages. Over time, these keys help build a profile for each device and track its history. This can help businesses identify devices that need to be replaced and recognize if an error is an isolated incident or a pattern of faulty behavior by a particular device.

Automation is one of the key advantages of IoT. When an IoT sensor detects something that requires a response, waiting for a human operator to manually react could have devastating consequences. There could be an open valve wasting thousands of gallons of water, a connection failure preventing someone from using a device, or a health-related emergency. The consequences aren’t always dire, but even small delays can significantly impact costs, damage reputations, and decrease the lifespan of equipment—especially at scale.

Blockchain helps facilitate automation with “smart contracts,” which pre-approve transactions for individual devices in predetermined circumstances. For example, if a factory is using predictive maintenance, and IoT sensors detect that a specific part or piece of equipment’s performance has fallen below a set threshold, the sensor can trigger an automated order for a replacement part. The blockchain functions as the trusted “authority” that approves the transaction.

Back to the cold chain monitoring example: suppose your IoT sensors indicate that your perishable goods have spoiled or experienced freeze damage in transit. You don’t want to wait until the shipment arrives at its destination to replace the order. Blockchain IoT not only provides a digital trail to prove the carrier was responsible for the loss, but with smart contracts, it could automate the replacement process to reduce the delay that end customers experience.

Smart contracts could be used to automatically coordinate services as well. Say a large facility has an IoT sensor to detect scaling, contamination, or fouling in its water cooling tower. These issues reduce the efficiency of the entire water cooling system and often require a specialist to come and treat the system. When the contamination or mineral buildup reaches a set threshold, smart contracts could enable the IoT device to automate the process of scheduling any required services and explaining the problem.

Some argue that smart contracts’ ability to automate transactions will also play a vital role in making IoT solutions more scalable, removing the need for multiple parties to sign off on individual transactions—which can become highly disruptive for IoT enterprises.

IoT devices can be hacked to use in botnets, steal valuable data, breach private networks, commit identity theft, or simply disrupt the device’s core functions. Given the sensitive nature of IoT data and their proximity to other vulnerable systems, IoT security is a constant concern for businesses that rely on connected devices.

While there are many layers of IoT security solutions, there are also significant constraints. Most IoT devices are battery-powered, and can’t handle energy-intensive processes. Many of the networks that facilitate IoT connectivity also tend to have very little data throughput, making it difficult or impossible to update firmware over-the-air (OTA).

But some aspects of blockchain could significantly enhance IoT security. Its decentralization ensures that malicious third parties can’t simply hack a single server and corrupt the data a device stores. Additionally, any attempt to access that data and any changes to it or a device gets documented.

Additionally, blockchain can improve security on IoT devices people interact with, storing and verifying biometric data in multiple locations so that it can’t be altered. This ensures that if someone has physical access to a device, that doesn’t mean they have access to any of its data or functionality. However, storing this information via blockchain creates security risks as well, since the information could be stolen in a breach.

1.5) Keep a record of who has accessed IoT data

Just as blockchain keeps a record of each individual device’s history, it can track the same for users. This helps businesses investigate changes—they can see which user last accessed a device and how they interacted with it. And similar to how a device’s history provides insights into its reliability, a user’s history could demonstrate their credibility and performance, helping businesses reward good work, analyze patterns and decision-making processes, and improve quality assurance.

Blockchain could bring numerous benefits to IoT, and with IoT’s rapidly growing applications, blockchain IoT could become an integral technology in many industries. But we’re not there yet. The world of IoT still presents significant challenges for actually implementing blockchain. Here’s what makes blockchain difficult in IoT settings.

Most IoT devices have a single battery that has to last their entire lifespan. Under ideal circumstances, they can last 10 years or more. Even if the network can handle increased data throughput, adding data-intensive processes consumes more power and shortens the lifespan of the device. Since blockchain IoT stores data in multiple locations and every transmission includes a chain of information, every process becomes more data intensive. While gateways and other network entities can help support this additional strain, blockchain IoT (and/or battery technology) will have to evolve before it’s suitable for widespread use.

One of the key benefits of blockchain in IoT is its ability to increase trust in your data, devices, and users. But when digital ledgers keep track of physical objects, there’s a security gap blockchain isn’t fully equipped to address. Could blockchain in IoT lend credibility to fraudulent data?

In 2016, Martha Bennet, VP principal analyst at Forrester, suggested that this disconnect represented one of the greatest challenges to blockchain IoT:

“Another much-neglected area is the interface between the world of atoms and the world of bits: how do you verify that off-chain objects haven’t been tampered with, or that the person who’s turned up to fix an IoT device is who they claim to be?”

Blockchain’s ability to automatically share data between multiple parties and store it in multiple locations is valuable for IoT, but it’s important to consider who will automatically have access to what. Some worry that the oversight and transparency blockchain provides could give too much visibility to third parties. However, this concern ultimately hinges on the level of access each party has and how clear the parameters are around sharing.

Since one of the intentions for blockchain is to provide “proof” that IoT data can be trusted, it will inevitably be referenced in legal proceedings. But Martha Bennet of Forrester sees this as another blindspot in blockchain IoT.

“For example, who has to take responsibility if a device takes action based on a rule that's been automatically executed by a blockchain-based program triggered by another blockchain-based program, but that action turns out to cause damage or financial loss?” she asks. “The cross-border nature of many permissioned and all nonpermissioned blockchains raises the question about which jurisdiction should apply. And then there’s the ‘smart contract’ myth: the outcome can only ever be as good as the original capture of the rules and the quality of the programming; and without the involvement of real-world lawyers at their inception, they’re unlikely to be accepted in a court of law.”

For blockchain to be a definitive source of truth IoT businesses can depend on, the industry will need clear guidelines about how these distributed ledgers will hold up under legislative scrutiny, or else developers will need to work with lawyers for each implementation. In all likelihood, we’ll need to see how things play out in court over the next few years as organizations, government entities, and individuals submit blockchain IoT data as evidence.

3) Continue exploring the future of IoT

Blockchain IoT is one of the many exciting technologies coming into play in the future of the Internet of Things. Over the next few years, we’re going to continue to see this sector take off in fascinating new directions as 5G, NB-IoT, and LTE-M become more accessible and enjoy wider adoption. And innovative new applications for connected devices are emerging all the time. 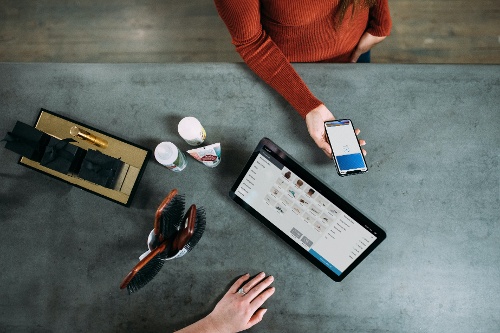 IoT in Retail: How Smart Devices Are Transforming Stores