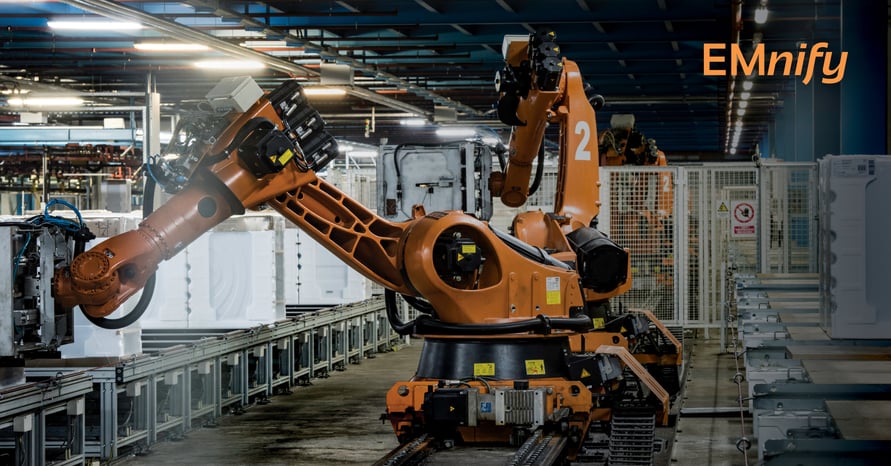 Numerous demand factors affected a broad range of businesses during the current coronavirus pandemic. Unexpected peaks in demand, significant reductions in demand, and reduction in supply bottlenecks, are just a few examples. It quickly became clear that companies that were using smart warehousing prior to the outbreak had a clear advantage over those that weren't.

So, what is smart warehousing? Smart warehousing is an application area from the “Logistics 4.0” complex. It is essentially a warehouse environment where instead of common operations being performed only by humans, they are completed via machines and computers in a totally data-driven way using IoT-based technologies.

Like other forms of business automation, warehouse automation improves productivity and saves costs. According to forecasts by Tractica, logistics and warehousing robot shipments worldwide will grow from 194,000 units to 938,000 units from 2018 to 2022 as many companies rush to adopt robotic systems.

In both the retail industry and manufacturing industry, digitization through the Internet allows for numerous new opportunities. Paths for new, more efficient, and partly autonomous business models and production chains are being paved thanks to the Internet of Things, whereby numerous 'things' - objects as well as humans - can be connected to streamline and optimize existing warehouse processes to make them 'smarter'. In order to master the increasing demands on efficient intralogistics, companies are increasingly relying on the digital networking of the entire supply chain. In the smart warehouses, intelligent IT systems take control of the entire process flow in each step. Below are three IoT-based technologies in smart warehousing today.

Autonomous sorting robots in smart warehousing can move independently and utilize sensors and cameras for help with navigation. They have an adjustable storage compartment and a code reader with which they can classify the packages and place them in the corresponding output line. At the picking station, the operator places the packages in the robot, which scans the label, processes the information and transfers it to the shipping area.

Another type of sorting robot can be used on a mezzanine. Through entry channels and a variety of levels and exit ramps, goods can be moved straight to the shipping area. The operator places the packages on the robot, which then picks up the incoming products, sorts them and brings them to the corresponding exit.

The main advantages of mobile robots in smart warehousing are:

If the robot technology in the smart warehouse is still too unsafe and too complex, there are other ways to future-proof your warehouse. One way is image recognition. Employees often loose concentration after several hours leading to incorrect consignments and subsequent customer complaints. An image recognition system supports the employee as it recognizes the component and responds accordingly or guides the employee via a monitor.

With intelligent software solutions, logistics companies and automobile manufacturers have the opportunity to increase product and processing quality. Systems provide the relevant employee with a screen where they can see which component they need to take from which compartment and in which order. From an employee satisfaction perspective, the advantage here is obvious - a more relaxed, streamlined, and straight-forward process.

The reasons for this are simple. The human brain thinks in pictures. In fact, our brains subconsciously convert letters into images –  but this process is more difficult with numbers and more complex symbol combinations. For example, the employee assists a camera-based system that gives him visual, positive feedback for the proper completion of tasks. If an error were to occur, the system immediately notifies the employee and advises on how to do the task correctly. Another advantage of image recognition in such cases is the complete and visual documentation of the work done. If there are errors in production, the process can be reviewed in detail and a mistake by the logistics company can be ruled out without any doubt.

Driverless transport systems (DTS) should not be confused with autonomous sorting robots. DTS are used today, for example, to make the material flow more flexible and to bridge longer distances. In practice, it can appear that materials are automatically transported and handled with active or passive load handling devices.

The load capacity of a single driverless transport vehicle can range from three to fifty kilograms. The speed is typically around 1 m / s in environments with passenger traffic, but higher speeds can be achieved in fully automated areas. However, the braking force and thus the load amount always limit the maximum speed.

Among all automated transport systems, DTS are considered a solution that promises maximum flexibility. They can be easily integrated into existing structures (warehouse structures, driveways, and work surfaces) and are suitable for the transportation of different goods. In addition, changes to the warehouse layout can also be implemented during operation or the entire conveyor system can be completely relocated. DTS also offer advantages in the operational process, as changing the funding sequence or dynamically adapting to fluctuating performance requirements (as often occurs in shift operation, for example) does not generally pose any problems for the systems. A main motive for the use of driverless transport systems is generally automation of work processes and thus the reduction of manual work. This is because unlike a human colleague, a driverless transport vehicle does not take breaks and is always ready for use, thus ensuring continuous supply. In the areas of logistics and production in particular, the switch to DTS can significantly increase productivity.

The main difference between self-guided vehicles and mobile robots is that the former is an automatic system and the latter is an autonomous one. While DTS move along a predefined route that they can recognize using a laser or wire control, autonomous robots constantly adapt their route thanks to artificial intelligence. The load-bearing capacity is also an important difference. Autonomous mobile robots normally work with boxes or light packages, whereas DTS are more used for pallets. Neither system is better than the other. Both meet different needs. For example, self-driving vehicles are extremely efficient when it comes to handling heavy loads in warehouses with constant operation (e.g. in production logistics).

All of these scenarios and the associated advantages are linked to the condition of digital networking. All scenarios therefore belong to the generic term of the Industrial Internet of Things (I-IoT). This is another example of the pragmatic use that I-IoT has not only for production, but also for logistics and smart warehousing.

That said, a smart warehouse is not just about automation but also the collaboration between machines and humans. Thanks to the Internet of things, a plethora of moving parts, i.e., products, devices, and workers, in a smart warehouse can be simply connected and managed in one network. A lot rides therefore on the network, coverage and connectivity type. To find our more about the benefits of cellular IoT connectivity, chat to one of our experts today.

What can your connectivity provider do
to ensure your IoT device security?

Check out our Guide for Cellular IoT Security for 25+ best practices to ensure a secure IoT solution for your business.